What’s Happening in May & June

The next Feldenkrais® series are just around the corner, and they’ll be shorter than usual: four and five weeks.

At the end of June, I’m going to the annual Feldenkrais conference for five days. Count on my coming back with a bunch of new ideas we’ll play with in class, as I’ll be training with my mentor Jeff Haller, as well as several other deeply experienced teachers. The theme this year is “Discover Ease: Finding What Already Exists.”

Interested? The conference has workshops open to the public. These include: 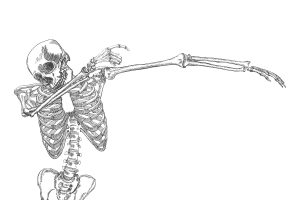 The conference is in Boulder, CO, which has been on my bucket list for years, so I’m taking some additional time to explore and perhaps do a short retreat in July. Classes will likely begin again the second or third week of July.

The focus in my May and June classes will be shoulders, arms, and hands. Most of us have injured our shoulders, or dealt with Carpel Tunnel or another repetitive-motion issue. We all benefit from understanding more clearly how to mobilize this area. (How often do you find your shoulders up by your ears?)

More about Your Shoulder Girdle

“Nearly every bone in the trunk, from occiput to pelvis, furnishes surfaces for the attachments of muscles which are also attached to some portion of the shoulder apparatus. . .”—Mabel Elsworth Todd, The Thinking Body: A Study of the Balancing Forces of Dynamic Man. 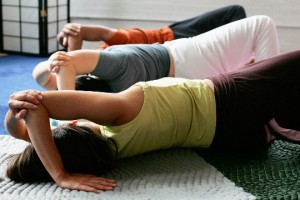 Todd points out that our shoulder and arm muscles have a wheel-like distribution. She writes, “The muscle power must be applied so as to operate through as many arcs as the range and direction of movements require. This is accomplished by a wheel-like design whereby muscles attached through great distances over many surfaces of the skeletal framework converge about the shoulder joint. . . . It is this wheel-like arrangement of lines of muscle force through all planes which gives such enormous power to the arms and hands, not alone in doing heavy work. . . but also in the control of delicately centered movements of the hands and fingers.” (Ibid)

We’ll be rolling those wheels in June: register here.

Russ Mitchell, fresh from the latest segment of his Feldenkrais training, will teach five classic lessons on Sundays. You can bet I’ll be there! Register for his series here.

Do Saturday mornings work best for you? Consider coming to Patterns Lab, 11:30 am-1:30 pm. Prerequiste: at least one series of classes or package of private lessons with me, or previous experience with the Feldenkrais Method®. Please email me if you’re interested in joining.

I just spent five days soaking up new knowledge and sharing insights with dozens of other Feldenkrais® teachers, at the 2013 Feldenkrais Conference for teachers of the method. 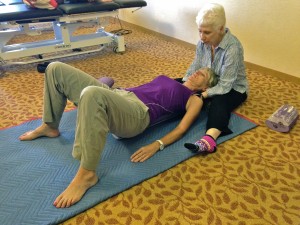 Barbara Abramson explores working with Stacy Barrows on a SmartRoller®. Barrows, both a physical therapist and a Feldenkrais practitioner, designed the SmartRoller.

Below is just a snippet of a workshop I took with master trainer Jeff Haller. Titled “Ground, Grounding, Grounded,” the workshop focused on stability and mobility. Dr. Haller is particularly interested in both how we begin movement and how, even as we move, we can stay free and available to change at any moment. Fascinating: I’ve come away with lots of ideas to explore, in both private lessons and group classes. (Yes, that is me demonstrating on the table!)

This is the first time I’ve attended our annual conference: I look forward to more.